✓ Fast and effective recovery between workouts

The functions of Volumax mTor, the god of anabolism

The Mammalian Target of Rapamycin, better known by the name of mTor, acts as an on / off switch for cellular reproduction, synergistically coordinating nutrients and hormonal factors.

In ON mode, the cells grow in size and number thanks to the activation of the P70S6K protein; when it is turned OFF, catabolism processes are triggered to face the lack of nutrients for the survival of the body.

Therefore, a powerful metabolic effect on the regulation of appetite and a sense of satiety is linked to this predominant characteristic.

For the record, we remember that the entire pathway was decoded only in 2006 at a university research center on obesity, by a team of scholars coordinated by Dr. Daniela Cota.

Insulin, the insulin-like growth factor and some amino acids have long been believed to be the origin of the mTor pathway control.

Leucine, one of the branched-chain amino acids, and its most interesting metabolite HMB continue to acquire ever greater scientific interest as independent activators of mTor and therefore of muscle growth.

It has also been shown how Zinc contributes to the entire mTor path, blocking some inhibition pathways. The active substance forskolin, present in the coleus forskohlii plant, also seems to activate mTor indirectly.

Our research has moved in the direction of providing a formulation with active ingredients that in effective low dosage really managed to optimize the mTor activation processes. 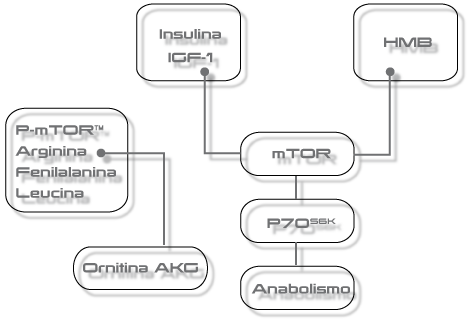 The answer is Volumax mTor

With Volumax mTor, Net integratori is the first to offer you the best result that Italian research in the field of elite sports supplementation could present.

With 6 capsules, obtained with exclusive MicroFast Technology™, you will have at your disposal to unleash your full potential:

Designed for elite athletes, now that Volumax mTor has descended to earth, there are no more excuses for hardgainers!

How to take Volumax mTor?

> 3 capsules within 30 minutes before any workout, will allow you to:

> 3 capsules immediately after a physical performance will ensure:

For elite athletes, we also suggest 1-3 capsules before bedtime and as soon as you wake up the morning after the performance.

mTor is an enzyme discovered by researcher Daniela Cota in 2006 at the Obesity Research Center of the University of Cincinnati (Ohio, USA).

The acronym “mTor” means Mammalian Target of Rapamycin. Rapamycin is an antibiotic also used as an immunosuppressive and as an anti-tumoral support.

The mTor (as well as other metabolic regulators connected to it, such as the pkb, and p70s6k) is instead a booster for cell growth and is linked to the metabolism of different amino acids. The basis of this stimulus is leucine, and it is therefore logical to understand how the connection between mTor and hmb is automatic and synergistic.

All these functions are linked (as can be guessed) to insulin, in fact the mTor captures and amplifies not only the effect of this hormone but also that of other growth factors such as igf-1 and igf-2.

In addition to this, the mTor is stimulated in its components (in fact it is called the mTor complex because it is made up of several amino acid-based compounds) also by phosphatidic acid and by a correct oxidative stress (if this however exceeds certain thresholds it becomes inhibiting).

Phosphatidic acid is an interesting phospholipid that can be derived from the hydrolyzation of phosphadylcholine (lecithin type) and which performs functions as a second intracellular messenger.

When there are signs of high energy and quality of nutrients, the mTor optimizes its action, logically with unbalanced or poor nutrition it is not possible to fully perform its action except as an anti-catabolic support.

The activity of training with weights already creates the conditions for a greater uptake of amino acids by the muscle cells but probably in turn becomes a positive mTor stimulus.

This claim is feasible as it has been seen in vitro how the mechanical stimulation of muscle preparations has increased the concentrations of phosphaditic acid and the increased functioning of the mTor complex.

Summarizing, the mTor is a powerful metabolic accelerator, stimulated by amino acids, in particular by leucine and its accomplice hmb, as well as by phenylalanine. Phenylalanine promotes the endogenous creation of tyrosine.

Tyrosine is an amino acid that is effective towards the synthesis of mTor; the question is why there is more talk of phenylalanine supplementation than directly of tyrosine?

The answer is relatively simple: it seems that endogenous tyrosine production is more effective than simple exogenous intake.

In light of these considerations, the Net Integrators research center has developed its Volumax mTor, a supplement with truly unique properties in its simplicity and the completeness of its formulation.

As previously mentioned, at the base there is in fact a “massive” dose of HMB, which turns out to be the first pillar on which all the construct of this product is based.

In fact, it can be said that a product with such a formulation is the natural evolution of the hmb, a supplement that remains, even if taken individually, interesting in its anti-catabolic potential but that, in the light of the studies that appeared on the mTor (which until 2006 was practically unknown) greatly enhances its potential.

The second pillar of volumx is phosphatildiserine, also with a pro-serving dosage of absolute effectiveness both as an enzyme stimulus and as an anti-cortisol support.

The third pillar is represented by the exclusive amino acid mix called p-mtor™.

Inside the p-mTor™ we find a refined balance of Leucine, Phenylalanine, Arginine Alpha Ketoglutarata (AKG).

From this aa mix it is clear how the Volumax mTor adds to the stimulus of our “friendly enzyme”. In fact, the conspicuous presence of akg, reinforced by ornithine alpha keto glutarata (okg), is symptomatic of a perfected search for recovery and metabolic optimization by leveraging various “restore” plans by also acting on hormonal control (linking to the presence of phosphadylserine).

In this way, the goal of the Volumax mTor is not just the “simple” post work-out, but at a complete and synergistic product, that can work well as a morning “starter” and / or as a “restorative before sleep”, or if desired a “companion” to a good “pre-workout”. This is because the volumax components allow for great metabolic versatility.

To complete the “design” of this “mythological” formulation there is also the indispensable presence of vitamins C and B6, of the consolidated metabolic optimizers, which prove to be precious supports both in the case of the hmb and the mTor.

We therefore state that a product like volumax can be taken in the morning and in the evening, plus an additional dose after training. In the post-workout intake there could be a positive synergy with creatine and glutamine, but this can and must be a free choice of the user (also in quantity).

As we have seen, the road taken by Net to arrive at the determination of the Volumax mTor, is a rather complex path, although essentially simple in its choices and philosophy.

The product obtained is has immediate effects, is easy to use and with pro-dose dosages absolutely in line with truly effective quantities.

On training days it is recommended to take 3 Volumax mTor capsules as pre-workout and 3 capsules as post-workout.

On rest days, take 3 capsules on an empty stomach in the morning as soon as you wake up, to optimize the anti-catabolic efficacy and maximize the anabolic one.

SAVE 5 € NOW
ON YOUR FIRST ORDER
Sign up for the newsletter and get yours now
coupon! The discount is not valid on pick up in
shop.
[Newsletter_form]